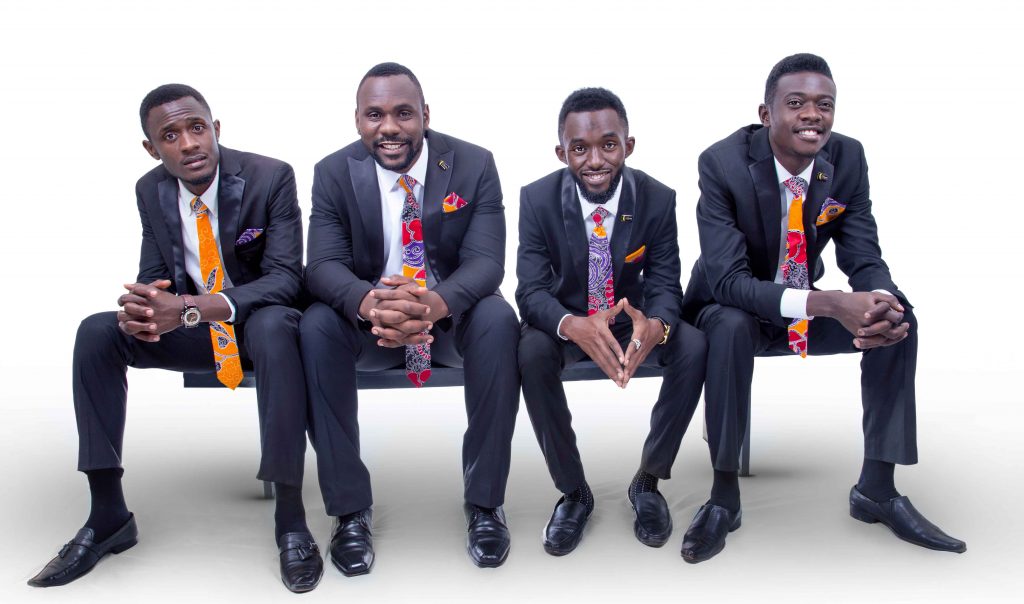 When the vision or the dream was created in their minds and none of them of course had how big this could turn to be given the fact that the break forth out was far fetched and not easy to envision fully there and then which stood a question of time by then.

The inception of this group begun off way back in University that is Uganda Christian University-Mukono main campus, from the hoods of hostel life where these beloved started off this a capella music, it was by then comprised of Tashobya Alvin who was the bassist,Nyombi Andrew who did the high tenor, Mark Mugume who did the Alto and Lubwama Samuel who did the bariton or say lead voice and i can guarantee you that even in its initial stages, this vocal band had “work” like it is said in today’s way of talk, these guys could bring it on and you would get to think they have spent years doing it, so synced vocally, the harmonies on point, the dynamics very awesome to mention but a few, it was awesome hearing them sing.
Doing their practises from the tupendane hostel in bugujju, and whenever they had a performance, they would make sure each one of them had a suit, black in color and clean, so if any of them didnt have, that person would atleast hire, which built in them the value/discipline of excellency and smartness even when they had to perform before fellow students, cause they kicked off this while they were still students, with so great hardwork and determination, these guys never gave up, having to go for gigs and returning late, they never gave up on this dream and today we can see the results of not giving up.

The group kept on the evolving, the canaan gents have had a lot of evolving, some members getting off the group due to a couple of responsibilities and others coming on, in this regard we see Mark Mugume and Nyombi plus Alvin who today stand as pioneers and recognised as the dream flag bearers go off and this welcomed the new faces; that is Ssentongo Charles the present day Beat boxer of and with this vocal band and Kawuki Aizak the bassist, who rolled this band to a step higher, we see these guys do songs like Sing, Omutanda, Nkwagala, He lives, Live Your ways to mention but a few literally the whole “Nkwagala EP” and the same guys witnessed the Canaan Gents being brought on board as specimens for the “PowerFmPresents” a concept by Power fm that gets to unplug artists and fully bring them out to the gospel music limelight and scene plus industry at large, so the canaan gents have really journeyed, do not see the present day canaan gents and fail to see how they have come evolving.

From 2011 and now we are in 2018; I must say it has been a journey that is worth celebrating, 7 years of great a capella music that has seen them stand before kings, gain international influence and also win them accolades back to back in the various gospel music awards’ events, these guys are gems in this game.
So in 2018 we see an evolvement still, with new faces on the scene but still this has not and will never the agenda neither the vision or even the focus of this prolific vocal band; the Canaan Gents and today we see what we see because none of them has compromised the band’s vision.

Canaan Gents marks 7 years of great and impacting a capella music, majoring in genres; Afro-beat, Afro-Pop, Christian, Christian dancehall, RnB, Soul and Pop, and they just but do them so nicely, these guys do music with only their mouths, no instruments rather they themselves become the instruments and so they get to produce this amazing music that today you hear and stand in amazement of how God is good and how he gives gifts generously.

Canaan Gents are based in Uganda and they are one of Uganda’s top notch and prolific Acapella groups that everyone would love to listen to, they are invited to sing on big stages, before dignitaries and so on and so forth and this is all because of God’s divine enabling, and these guys choosing to stick to the purpose as well.

Pagan Roots of Halloween and Why Should Christians Care?